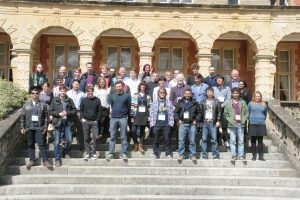 At the end of April 27 PhD students from three CDTS based at Imperial, Edinburgh and Oxford participated in a two-day creativity sandpit.  We were very fortunate to welcome to the event three industry engineers, Walt Aldred,  Research Director and Scientific Advisor for Drilling at Schlumberger Gould Labs, Dr. Nathan Chong, ARM researcher, and Dr David Sharp, Head of Technology 10x at Ocado. Each gave a stimulating briefing for their challenge: Underground SLAM, Novel parallel algorithms for warehouse operations, and New applications and opportunities with the Internet of Things (IOT). Together with four academics from Imperial and Edinburgh, they then participated as mentors throughout the sandpit, giving valuable guidance and feedback.  Professor Peter Childs of the Dyson School of Engineering at Imperial gave a plenary talk entitled “Ideas to Reality”, which offered a compelling picture of the importance of creativity and design,  and Imperial’s impressive track record in turning this into industrial impact.

During the first half-day, the students learned about the challenges, started asking questions and having initial ideas, got to know each other, and built some weird Rube Goldberg contraptions for popping party crackers. On the second day they constructed mind maps and formed groups to work on one of the problems. After initial presentations and feedback from everyone, the mentors ran a “test lab” to help the students challenge themselves further about their ideas. On the final half-day the students presented their ideas for final feedback and then gave an elevator pitch to conclude. They formed seven groups, and many exciting ideas emerged. One group worked on a novel approach to “underground vision” and several groups worked on algorithms for autonomous robots careering around a large warehouse without colliding, including from one group a simulation built during the event, There were three innovative IOT applications, for smart city lighting, a non-invasive  hormone detector and emotion directed music.

Students appreciated the chance to discuss research ideas from an industry perspective and to work on real industrial challenges. The aims of the sandpit were several: to give them an opportunity to reflect on their own approaches to creative thinking, enable them to meet and work with peers from other institutions, and to discuss research with industrial engineers.

The event was organised by HipEDS Programme Director Dr Krysia Broda and facilitated by a team from Knowinnovation.