March 2004: a big step forward in the quality of results and presentation demonstrated in Real-Time Augmented Reality and Personal Localisation using Single Camera SLAM. This video, produced in collaboration with Nick Molton, Ian Reid, Ben Tordoff and Walterio Mayol, demonstrates the general operation of our single camera localisation and mapping technique and its application to augmented reality and personal localisation. Two new developments beyond the system presented at ICCV2003 here are Nick Molton’s algorithm for feature patch transformation (meaning that features can now be matched over larger camera motions; even when upside-down), and the use of a wide-angle lens with non-perspective projection characteristics. The augmented reality demonstration shows virtual “kitchen fitting” as furniture is added interactively to live video (by attaching it with mouse-clicks to automatically-mapped scene features) while the camera continues to move. We also show personal localisation with a passive wearable camera mount built by Walterio Mayol. All image and SLAM processing and rendering runs at 30Hz on a Pentium M 1.6GHz laptop and this video was made by direct screen capture from the system running in real-time. Besides a laptop, the only equipment required is a cheap IEEE1394 “Firewire” webcam. 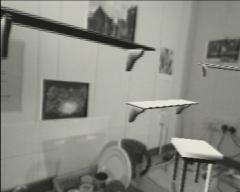