June 2007: Some new results published at RSS 2007 on extending the range of monocular SLAM using a hierarchical submapping approach, in collaboration with Laura Clemente, José Neira and Mingo Tardós from the University of Zaragoza and Ian Reid from Oxford. High quality submaps containing around 100 features are built using MonoSLAM with inverse depth feature parameterisation and the Joint Compatibility test to reject outliers. Submaps are chained together to form a large map and loop closures are detected with a map matching test. This approach allows mapping of large outdoor loops with a single hand-held camera, and all the steps of the algorithm will in principle run in real-time with current hardware. The results shown here are for Keble College quad in Oxford, a loop of at least 200m. 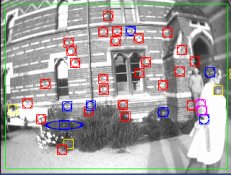 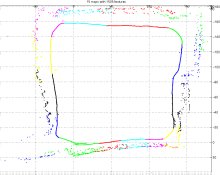