The emergence of non-volatile memory (NVM) is expected to revolutionise how software is written. NVM provides storage persistence across power failures, yet offers performance close to that of traditional (volatile) memory. As such, programs that require data persistence (e.g. databases) can achieve an orders-of-magnitude lower latency by storing their data on NVM rather than on standard disks. It is widely believed that NVM will supplant volatile memory entirely, allowing efficient access to persistent data.

However, writing correct persistent programs is a difficult task. A key challenge for the programmer is correctly accounting for the “persistency semantics” of the hardware, which describes the order in which writes performed by the CPU become persistent. Volatile caches between the CPU and the NVM can make persistency semantics quite counterintuitive, and motivates the need for formal verification.

Prior work has developed models of how persistency works in mainstream hardware such as Arm and Intel-x86. These models have been developed by studying specifications and interviewing designers, but have not yet been validated empirically on real-world hardware. 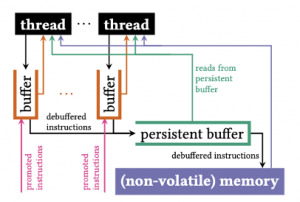 This project aims to address that shortcoming. Validating persistency models on hardware is challenging because in order to test whether data is truly persistent we need to power-cycle the test machine, yet doing so for every test-case would led to infeasibly low testing throughput.

To get around this difficulty, we have obtained a specialised hardware device called a “DDRDetective”, which is able to monitor the data traffic to and from the persistent memory while our test-cases are being executed. Work is expected to start imminently on using the DDRDetective to validate the persistency models for the Armv8 and Intel-x86 architectures.

IMPACT. “The correctness of programs that exploit non-volatile memory is an important challenge to Arm. The formal semantics for how persistent memory works will be key in addressing this challenge. Practical methods to run litmus test for persistent memory empirically on real chips would help validate microarchitectural implementations of Arm persistency models.” – Andrea Kells, Director, Research Ecosystem, Arm Ltd. –