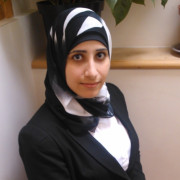 Layal Hakim is a mathematician and is currently a postdoctoral research associate at the Department of Computing in Imperial College London.

Layal was born in London, England. She attended Brunel University, and graduated with a Bachelors of Science degree with Honors in Mathematics in July 2010. After that, she started a PhD, funded by the EPSRC, in the same department under the supervision of Professor Sergey Mikhailov. Layal completed her PhD in April 2014 and joined Imperial College as a research associate in July 2014.

Layal’s main interests lie in the area of fracture mechanics, numerical methods to solve integral equations and differential equations, and programming. She also enjoys reading about other topics in mathematics and philosophy; and she enjoys painting.